Apart from its rich culture, natural beauty, architecture, food and myriad other charms, if there is one living creature that single-handedly contributes a huge chunk in revenue to India’s travel and tourism industry, it is that magnificent King of The Jungle – the tiger. Together, the tiger, the elephant and the rhino are perhaps the biggest draws for a wildlife tourist to India. The thrill of spotting those stripes is, I can say by personal experience, totally unreal and unmatched. Most of the world’s tiger population is spread over more than 40 national parks in India.

And since journeys are just as important as destinations, here are the most popular destinations where tiger-spotting compares to one of the best travel experiences the world can offer.

Kenneth Anderson enjoys the same fame as a legendary tiger hunter in South India that Jim Corbett enjoys in North India. In fact, 5 kilometres away from the present-day Bhadra Wildlife Sanctuary, Kenneth Anderson brought an end to the reign of a terrifying man-eating tiger at Lakkavalli Dam. Bhadra is a Project Tiger protected reserve, about 40kms away from Chikmagalur in Karnataka. Asides from tigers, that are about 37 in number here, the other gorgeous animals you can spot in the sanctuary include elephants, bisons, Wild Boars, Black Leopards, elusive Wild Dogs, Jackals, Spotted Deer, Barking Deer, Mouse Deer, Macaques, civets, Pangolins, Porcupine and the Malabar Giant Squirrel (endemic to the region). Bhadra sanctuary also has more than 300 species of birds. September to March is the best time to visit Bhadra. Forest fires in the summer months lead to safaris being cancelled during April and May.

Tadoba is such a virgin picturesque destination that it is called the ‘Jewel of Vidharba’. The national park is Maharashtra’s oldest and is situated in the Chandrapur district of Maharashtra. Tadoba National Park and Andhari Wildlife Sanctuary together form the Tadoba-Andhari Tiger Reserve (TATR). This area saw a steady increase in the tiger population ever since the park was included in the Project Tiger initiative. Asides from the majestic fiery stripes, you can also spot panthers, hyenas, sloth bears, wild dogs, jackals, barking deer, bison, sambar and deer. To increase your chances of spotting Mr Striped-Suit, the best time to visit is from February to May.

If wildlife enthusiasts are to be believed, Bandhavgarh offers you a 100 percent chance of spotting a tiger. Situated in Madhya Pradesh, Bandhavgarh has the highest density of tigers in the region. We are awaiting the census, but officials say there are close to 70 tigers in Bandhavgarh. The core area of the park is spread over 100 square kilometres. Other animals in the park include chital, sambar, muntjac or barking deer, wild boar, antelopes, Indian Bison, wild dog, leopard, nilgai, Indian fox and bear. Tala Zone 1 is the best area to spot tigers. The park is open from October to June, but the best time to see tigers is from April to June.

Any breathtaking, goosebump-inducing picture of a tiger that you see on Google was in all likelihood, taken at Ranthambore National Park. One of India’s largest national parks at 1,334 square kilometres, and indubitably its most famous, Ranthambore is the playground of wildlife photographers and scientists and lies in Sawai Madhopur district of Rajasthan. This was once the most sought after hunting destination of the royals (and their guests from abroad too). The park became even more famous when Queen Elizabeth II visited, and Prince Philip shot a tiger here in the 1960s. Protection for tigers from hunters was introduced here only in 1973 and is now one of the best and most protected tiger reserves in India. Dotted with ancient ruins, including a fort that tigers often visit, Ranthambore is picturesque. Apart from tigers, the park is home to leopards, jungle cats, sloth bears, hyenas, Indian foxes, jackals and crocodiles. Though the park is open from October to June, winter months are cold while the oppressive temperatures in summer months make it almost unbearable. February and March have pleasant weather, but the greatest chances of spotting a tiger are in April and May. The Bakaula area, with its dense forest cover and dotted with small watering holes, is particularly favoured by tigresses with cubs. 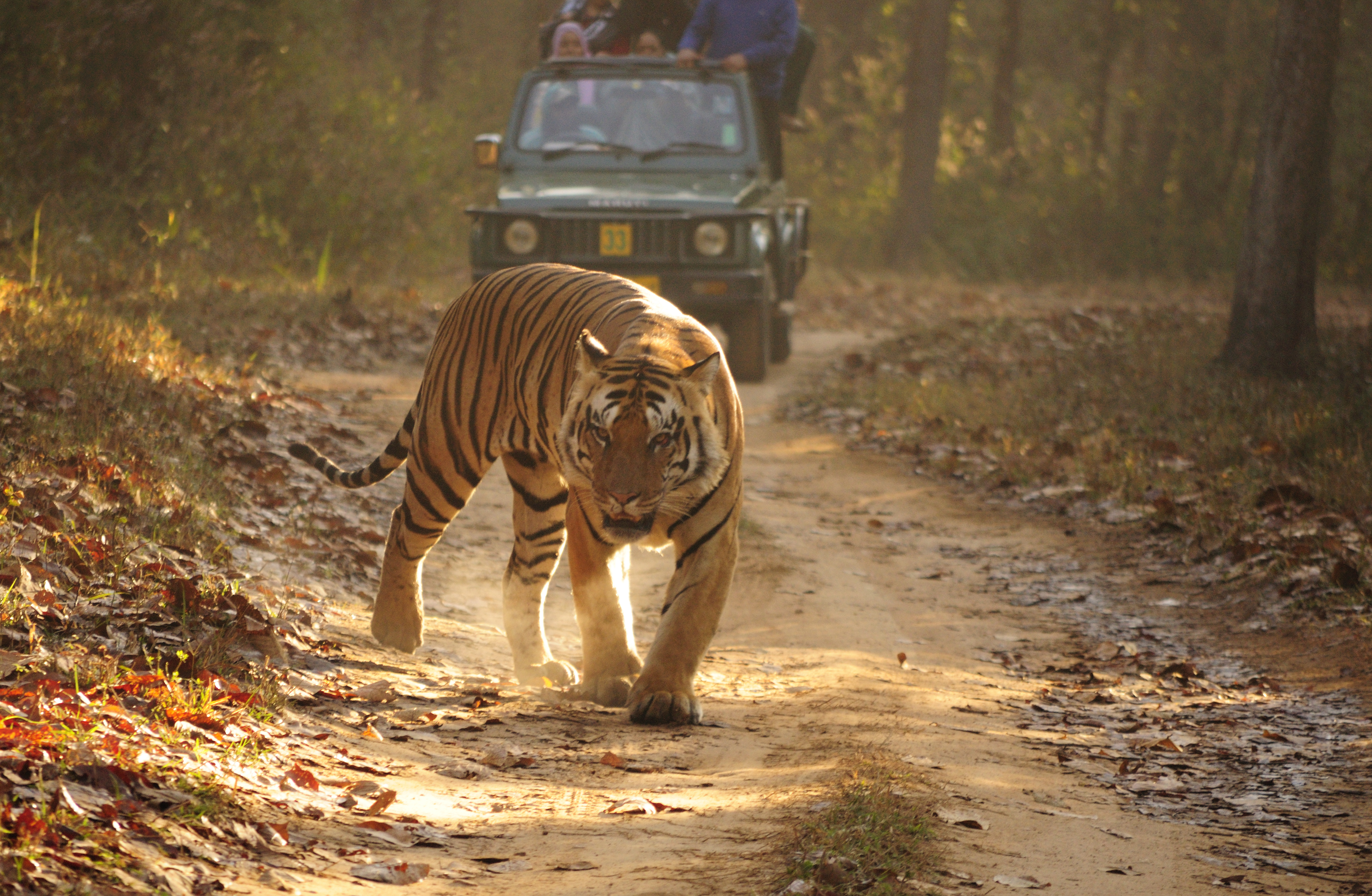 Did you know that this park in Madhya Pradesh was the inspiration for Rudyard Kipling’s The Jungle Book? The name Kanha comes from Kanhar – a clay-like soil – that is found in the region. And what makes Kanha a haven for those eager to spot a tiger in its territory is its topography. The fact that there are large open meadows means tigers and other wild animals are easy to spot. Not just the tiger, but also the barasingha, an endangered species of deer only found in Kanha, is a thrilling sight. Other animals regularly sighted include chital, gaur, three-striped palm squirrel, common langur, jackal, wild pig, black buck, striped hyena, leopard, mouse deer, porcupine, chinkara, samber and ant-eating pangolin. The Tiger Reserve covers an area of 940 sq km and is one of the best places to spot the national animal of India. The Mukki entrance has fewer tourists and please, as a gesture of respect to the King of The Jungle, please ensure that you take a safari and don’t indulge in a ‘tiger show’ – where elephants are trained to block tigers’ movement so tourists can get a good look at them. The park is open from October to June.

This site uses Akismet to reduce spam. Learn how your comment data is processed.